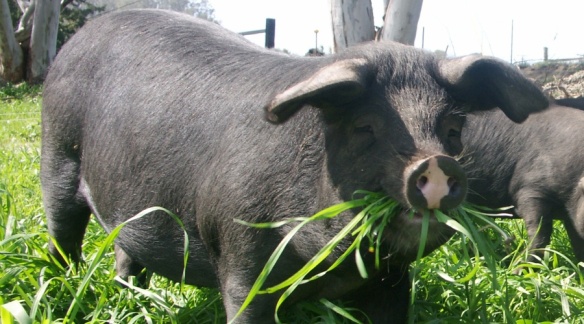 Some people seem to have trouble with pork. The most common symptoms are fatigue, inflammation, and – most interestingly – high blood sugar in both diabetics and non-diabetics. When I eat fresh pork, my blood sugar increases to between 120-150 and stays there for a very long time, and I am not diabetic. When I eat lamb, however, my blood sugar levels are between 96-113. For more detail please read my post Lamb is My New Best Friend.

Several Type 2 diabetics in the group Principia Carnivora, have reported blood sugars numbers as high as 175 after eating fresh pork and high fasting blood sugars the day after eating it. Aged pork products like bacon and prosciutto, however, do not seem to have the same effect. An interesting study by the Weston A. Price Foundation may shed some light on this conundrum.

The Weston A. Price Foundation (WAPF) is very knowledgeable about how different foods have been prepared by non-industrialized cultures. Pork is traditionally prepared by aging in salt or marinating in vinegar prior to cooking and consuming. So, WAPF decided to do a very small study examining how pork prepared in different ways affected the blood of three volunteers. Here is a description of the study:

“Three adults, including two females aged thirty-seven and sixty, and one male aged fifty two, participated in the study… Subjects each came to the laboratory once weekly for five weeks at the same time of day by individual appointment. On the days in which they participated, subjects were required to fast for at least five hours. A baseline blood test was first done. Each subject was then given a measured amount of meat to consume, at least three ounces.

All of the meats used were of the highest quality from sustainable small farms raising pastured livestock. Five preparations of meat were used:

The meats (1), (2) and (5) were cooked over low heat in a cast iron skillet for up to one hour, with a little water but no added fat, and salted to taste. The cooked meats were prepared well done. The bacon was cooked until slightly stiff, but not crisp or dry. The prosciutto was consumed from the package without any preparation.

After consuming the pork, subjects were allowed to leave the laboratory, instructed to drink only water as needed, and to refrain from eating anything else. Five hours later, each subject returned to the laboratory for a post-meat blood test.”

The results were fascinating.

“The results show unequivocally that consuming unmarinated, cooked pork shows a significant negative effect on the blood. Five hours after consumption, subjects showed extremely coagulated blood, with extensive red blood cell (RBC) rouleaux (cells in the formation of stacked coins), RBC aggregates, and the presence of clotting factors, especially fibrin…Two of the three subjects felt fatigued after eating the pork chop, which suggests reduced peripheral blood circulation due to RBC stickiness and aggregation. Because the tiniest microcapillaries are smaller than the diameter of a single blood cell, each cell must pass through singly and deform its shape in order to do so; blood cell aggregates simply cannot pass through them. ”

“By contrast, all three subjects reported no fatigue or other symptoms after eating the marinated cooked pork chop… [One] subject’s blood looks completely normal before consuming this pork chop. Then, five hours after consuming the same size portion of a marinated pork chop… The RBCs in this [subject’s] blood sample show a very slight stickiness or tendency to aggregate, and a few platelet aggregate forms are seen, with no fibrin. The subject’s blood is largely unchanged from before. The other two subjects showed essentially no change before or after consumption of the marinated cooked pork.”

“[in] the blood of the female subject, age thirty-seven, fasted, prior to consuming four strips of uncured pastured bacon… [her] blood [was] normal and healthy, without any RBC aggregates or fibrin… [Then] five hours after consuming the bacon… [her] RBCs [were] not aggregated; there [was] only a minuscule amount of platelet aggregates and fibrin. [Her] blood is essentially unchanged over baseline. The other two subjects’ blood samples also appear about the same, before and after consumption of bacon, too.”

2. Consuming processed forms of pastured uncured pork, including bacon and prosciutto, does not produce any blood coagulation or other visible changes in the blood at five hours after eating.

3. Consuming unmarinated, cooked pastured lamb does not produce any blood coagulation or other visible changes in the blood at five hours after eating.

“The results suggest that unmarinated cooked pastured pork may be unique in producing these coagulation effects on the blood, which also appeared quite rapidly, in less than ten minutes after blood draw, and did not clear up during an hour of observing the blood under the microscope.”

“The early blood coagulation and clotting observed after consuming cooked, unmarinated pork are adverse changes in the blood. A shorter blood coagulation time is associated with increased systemic biochemical inflammation as well as the possible formation of blood clots in the body, as in heart attack or stroke. This condition in the blood, if chronic, is associated with increased risk of chronic degenerative disease, including cardiovascular disease, cancer, autoimmune disorders and others.”

“We speculate that raw pork contains a toxin, unidentified to date, and that heat alone from cooking cannot destroy it, but that fermentation with salt, and also acid plus heat, do so. This toxin in pork, if it exists, is therefore heat-stable and requires further denaturation by salt or acid in order to detoxify it.”

For more details, please see their article: How Does Pork Prepared in Various Ways Affect the Blood?

Although WAPF, does not have any idea what the “toxin” in unmarinated or unaged pork might be, Dr. Peter D’Adamo’s work into how food lectins affect different blood types might offer an intriguing possibility. Apparently, pork contains a lectin that will glom all blood types in vitro. In other words, if a drop of this lectin is injected into your blood stream, your blood will agglutinate and you will die. The premise of D’Adamo’s dietary recommendations is that we should avoid foods that contain lectins that are known to agglutinate our particular blood type.

D’Adamo found in his practice that if people avoid foods containing the lectins that will agglutinate their blood, their health will often improve. It is certainly possible that people could absorb some of these food lectins intact and that this could negatively affect their blood quality – not to the point of actually killing them as would injecting the lectins directly into their blood stream, but enough to overtax their immune system and cause them to become ill with any number of chronic or autoimmune illnesses.

Apparently pork has a lectin that agglutinates blood types O and B, as well as an antibody to blood type A. He explains,

“Hog is very “A-like” immunologically, which makes it an avoid if you happen to have antibodies to the blood type A antigen, like type B’s and O’s do. Paradoxically enough, hog also has an antibody (iso-hemmaglutinin) in its tissues which reacts to the A antigen, so it should be avoided for this reason by A’s and AB’s as well.” (From: Why All Blood Types Should Avoid Pork)

It is possible that when pork is marinated in vinegar or aged in salt, the lectin and/or antibody is somehow broken down or altered in such a way that it is no longer capable of agglutinating the blood. It is – of course – pure speculation on my part, but the most plausible idea I have come across so far.  D’Adamo classes bacon and fresh pork together, but I have no way of determining if the lectin was actually found in both types of pork products, or if he is just assuming it is in bacon because it is in fresh pork.

It is also interesting to note that Dr. H. L. Newbold – who prescribed an All-Meat diet in his medical practice – found that most of his patients reacted very poorly to pork. He only had a handful of patients who felt good after eating pork, and – in a strange twist of irony – one of these patients was Jewish! The meat that Dr. Newbold found to be the most universally beneficial was beef.

Similarly, Dr. J. H. Salisbury, a prominent physician in the mid-1800s – who developed what became known as the Salisbury Cure – found that pork was a sub-optimal meat. Dr. Salisbury was a pioneer in using food to heal disease. He developed his diet by living on one food at a time for days, weeks, or months. He tested foods in this way to see how they affected his body. After many years of experimentation, he came to the conclusion that beef was the best food for mankind. Runner-up was lamb. A variety of other meats were considered okay if beef and lamb were unavailable, but he specifically discouraged his patients from eating pork.

So, if you are trying a Zero Carb diet and feeling tired, inflamed, or experiencing higher than average blood sugars, you may want to consider removing pork from your diet for a while and see if you feel better without it.