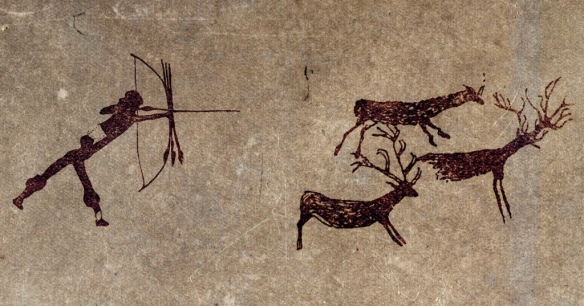 This is an interesting study which argues that our need for dietary fat is what drove our evolutionary development towards becoming the humans we are today.

It is our contention that two distinct elements combined in the Levant to propel the evolutionary process of replacing H. erectus by a new hominin lineage…One was the disappearance of the elephant (Elephas antiquus) – an ideal food-package in terms of fat and protein content throughout the year – which was until then a main calorie contributor to the diet of the H. erectus in the Levant.

Daily energy expenditure (DEE) of the hominins would have increased when very large animals such as the elephant had diminished and a larger number of smaller, faster animals had to be captured to provide the same amount of calories and required fat. This fitness pressure would have been considerably more acute during the dry seasons that prevail in the Levant.

Such an eventuality, we suggest, led to the evolution of a better equipped species, in comparison with H. erectus, that also had a lighter body, a greater lower limb to weight ratio, and improved levels of knowledge, skill, and coordination allowing it to better handle the hunting of an increased number of smaller animals and most probably also develop a new supporting social organization.

To read the full 12-page paper, please click the link below: