As many of my readers know, I am a huge fan of bone broth. I have been drinking it almost everyday since I began my Zero Carb journey 9 months ago. I found it extremely helpful during the adaptation phase while my body was getting used to an all-meat diet. However, I recently made some changes in my Zero Carb diet. I decided to decrease protein and increase fat in an effort to create a Ketogenic version of a Zero Carb diet. But, I continued to drink bone broth while making these changes.

I must admit that this was a very unexpected and shocking discovery. It was also very disappointing because I truly do LOVE bone broth. However, upon further investigation, it was not so surprising. Bone broth contains high amounts of the amino acid glutamine and, apparently, glutamine can easily be converted into glucose.It is for this reason that Dr. Thomas Seyfried, author of Cancer as a Metabolic Disease, recommends limiting glutamine, as well as carbohydrates, to people following a Ketogenic diet for cancer management. Cancer cells can use glutamine for fuel just as easily as they can use glucose from carbohydrates.

Bone broth has many wonderful healing properties, but it definitely inhibits the production of ketones. Many people choose to drink bone broth during both short and long fasts, but the powerful anti-ketotic effects of bone broth are likely to be highly counter-productive. One of primary benefits of fasting is its ability to lower blood insulin levels, and drinking bone broth during a fast may significantly reduce this benefit. So, if ketones are more important to you than the nutritional components present in bone broth, then you will definitely need to think twice before imbibing bone broth.

After I originally published this article, I forwarded it to a few of the Ketogenic experts to get their response. Jimmy Moore’s comment was that a person would have to be drinking “gargantuan” amounts of bone broth to have it affect the blood sugar and ketone levels this way.

So, I decided I should clarify that I was drinking 1 quart per day which I do not consider to be a “gargantuan” amount. It is certainly possible that drinking  only 1-2 cups per day would have had less of an impact, but I don’t think you can state that categorically without actually testing it. According to Kaayla Daniel, author of Nourishing Broth, 1 cup of chicken bone broth contains 1,000 mg of glutamine.

My whole point with this post is to bring awareness to the fact that bone broth may not be as innocuous as many people so blythly assume. If you are including it as part of your Ketogenic diet, or while fasting, you would be wise -in my humble opinion – to test its impact on your personal fasting blood glucose and ketone levels.

My Dog Sasha had been unusually tired for many months, so I decided to take him to a holistic veterinarian and have some blood work done. He does have fair sever hip dysplasia and the fatigue could simply be due to the pain and discomfort from this chronic condition, but I wanted to be sure it was nothing more serious than this. The first set of blood work did have a few worrisome abnomalities: 1) elevated ALP liver enzymes; 2) elevated eosinophils; 3) moderate levels of acanthocytes. There are a number of reasons that any or all of these could be elevated, some serious, others not so serious.

Acanthocytes are abnormal red blood cells that look like they have little spikes sticking out of them. They are often found in the presence of a type of cancer known as hemangiosarcoma to which German Shepherds are susceptible. Therefore, Sasha’s veterinarian recommended doing an ultra sound of his abdomen to see if there were any growths visible. Fortunately, the ultra sound was clear. All of his organs looked good except for his spleen which was enlarged. Apparently, it is common for German Shepherds to have enlarged spleens, but since hemangiosarcomas frequently begin in the spleen this did not instill confidence. I have fed Sasha a Bones and Raw Food diet (a.k.a. BARF diet a la Dr. Ian Billinghurst) for his entire life, but I have  fed him a lot of commercial grade chicken for economic reasons. I am now trying to feed him better quality meats, with emphasis on beef and lamb.

Sasha’s veterinarian encouraged me to keep a close eye on the acanthocytes because hemangosarcomas can sneak up on you. She recommened doing blood work again in 3 months. However, I decided to take a more proactive approach and do a water-only fast to give Sasha’s body a chance to do some internal house cleaning. I have done many fasts over the past 25 years, and I have experience beneficial results from all of them. One of the best books on the subject is by Dr. Jack Goldstein, a physician who almost died from severe ulcerative colitis. He completely regained his health through a series of very long water-only fasts. His book is now out of print, but it can be down-loaded for free through the Soil and Health Library here: Triumph Over Disease by Fasting and Natural Diet.

Because I love my dog more than anything else in this world, I was not about to eat in front of him while asking him to fast. Therefore, I did the fast with him. My orginal goal was to go for 21 days, but my own waning strength made it necessary for me to end the fast sooner than I would have liked. Sasha did absolutely awesome on the fast and could have easily made it 21 days. He was tired and slept a lot during the first 10 days, but then his energy began to improve. During the last 6 days of the fast, he actually got stronger. On the last day of the fast, I took him in for new blood work and the result were little short of remarkable. The ALP and eosinophils both fell by more than half, and the acanthocytes were completely eliminated. Sasha’s veterinarian said that she has never seen ALP fall that dramatically in any of her canine patients before. Needless to say, she was VERY impressed.

First set of blood work BEFORE the fast: 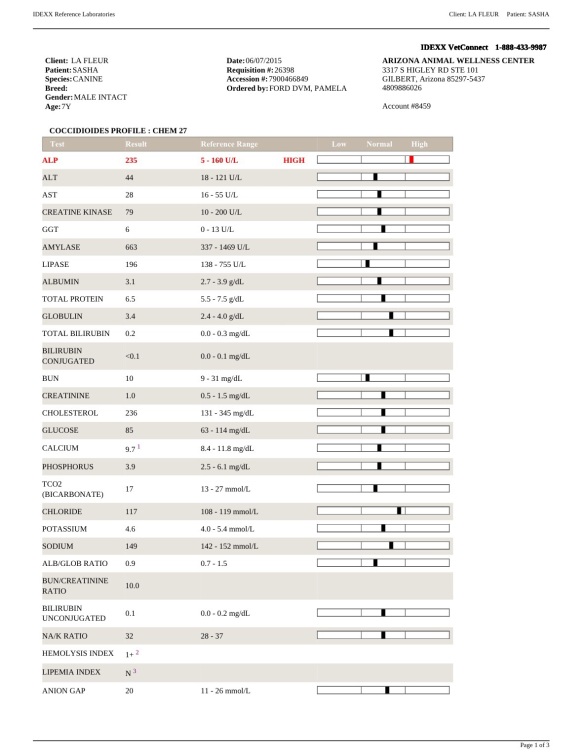 Second set of blood work AFTER the fast:

Oddly enough, while I was in the process of doing this fast with Sasha, I posted about it on Facebook. Much to my surprise, a number of my so-called “friends” decided that I was committing an egregous act of animal cruelty and called both Animal Control and the Police to complain about it. An Animal Control officer actually came out to check on Sasha, but the minute he saw him, he said, “Clearly, he is fine. Please take your post off Facebook because we are being innundated with calls to both Animal Control and the Police about this.” I told him what I was doing, that it was a therapeutic intervention for a health issue, and that I was working with a local veterinarian. He was an intelligent man and could see that Sasha was being well cared for. Anyways, another interesting experience…LOL… one the one hand, I am glad to know that they take complaints like that seriously, but on the other hand, I am quite taken aback by the fact that some people actually think I would do anything to hurt my dog. Fortunately, the results speak for themselves.

If you are interested in learning more about fasting in the context of a Zero Carb diet, please join us in the Facebook group Principia Lenta.