Kevin today after 10 months on Low Carb and 8 months on Zero Carb and weighing 155 lbs.

Kevin is an acquaintance of mine that I met through the Facebook forum Zeroing in on Health. He started his weight loss journey on a general low carb, ketogenic diet around October of 2013.  His top weight was approximate 230 lbs., but he preferred not to know the exact number. Prior to beginning a ketogenic diet, Kevin ran and biked daily, but he continued to gain weight anyway. After 10 months on a low carb, ketogenic diet, Kevin was down to 165 lbs. which he considered to be quite an achievement.

Kevin’s next goal was to figure out how to maintain this weight loss and that is how he happened upon Zero Carb. On a low carb, ketogenic diet, Kevin was eating vegetables 3-4 times a week as well as diet soda and some other low carb Keto junk foods, and he still suffered from cravings. Now, the only thing he consumes besides meat, eggs, and cheese, is coffee. Although it was not Kevin’s goal to lose more weight, he has none the less shed an extra 10 lbs during his first 8 months on a Zero Carb diet.

Kevin prior to adopting a Low Carb, Ketogenic diet and weighing 230 lbs.

Kevin posted his reflections in Zeroing in on Health today after 8 months of eating Zero Carb and he has kindly given me permission to share them with the readers of my blog. Kevin’s sense of freedom – from the bondage to food – is the most powerful message his words convey…

“When it comes to cholesterol, the numbers that matter are excellent. My triglycerides are down in the 70s. My HDL (the good stuff) is up into the 60s. Those are the only two numbers I pay much attention to. My total cholesterol is higher than my doctor would like. It means only one thing to me, a free test sooner than I would normally get one. LOL. The rest of the changes are harder to describe. I am leaner than I was 8 months ago. But, I am not massively so. I was pretty close to my goal weight when I started. I am slowly trending downwards. My fitness is better.”

“The biggest change is probably mental. I just have no real stress when it comes to health, food, or anything like that. I don’t count carbs. I don’t count calories. I don’t worry about macros. I have lost all the cravings for sweets. I have stopped drinking diet soda. That’s a mental thing, not a physical thing. I can see, now, how deeply I was addicted to the sweetness of it. I have learned to trust my body. I don’t know if many here will understand how deep that really is. My whole adult-life, I had been constantly betrayed by my body when I didn’t strictly monitor what I ate and my activity level. When I ate because I was hungry, I got fatter. I would know I was eating too much, but I couldn’t stop myself. I knew my body was wrong.”

“Now, I can trust my body is right. If I am hungry, I eat. I don’t worry if it’s 5,000 calories in a day (and sometimes it is). I know my body is asking because it needs it. If I am not hungry, I don’t worry about it. I know I don’t need it. If I am feeling like going out for a walk or a run, I do. If I am feeling like sitting in the yard and enjoying the sun without moving except to reach for my iced coffee, I do that instead. No guilt about being lazy. No concern about getting fat and losing my muscle. I am no longer a slave to my appetite. I would be ravenous sometimes. I couldn’t stop myself from eating. I would just eat everything I could get my hands on, trying to stop the hunger. Now, I can be hungry and wait until there’s food I want to eat (if I am out). It’s no longer an “emergency” when I get hungry.”

Kevin buys beef chuck in bulk and cuts his own steaks.

“My digestion (the whole process from eating to elimination) is massively better. I burp less, I fart less, I have no more of those stinky tonsil stones, I don’t “gurgle” as I digest, I don’t get cramps, I don’t get plugged up. Hell, I don’t even think about it. I didn’t realize how messed up my gut was until it wasn’t messed up any more. I remember an ex-girlfriend who could tell, over the phone, if I had eaten pizza because she could hear my gut complaining. The one time my wife begged me to cheat (and I foolishly agreed), she was soon urging me to get back on the diet. She had forgotten how much she appreciated the fact that I almost never fart.”

“My wallet is fatter. It would seem odd, considering what I eat. But, I usually spend less than $50 a week feeding myself. That’s less than $215 a month (often under $200/month). Back when I was addicted to carbs, I once spent $300 one month just on pizza. Just pizza. I lived alone. That month I probably spent a total of $600-$700 on food. Even eating just “low-carb” was harder on my wallet because of the vegetables which provided little in the way of calories and nutrition compared to their cost. I also was spending money on faux-foods like quest bars, artificial sweeteners, nuts, nut flours, low-carb breads, etc.”

“I spend very little mental energy on food and diet. I cook my meat to my liking when I am hungry and usually pre-cook some burgers to have for when I am hungry and don’t want to cook. I don’t worry about recipes. I don’t think of ingredients or food shopping. I don’t worry that things will go bad. I know how much I normally eat, and I buy only what I eat in amounts that are gone long before it would go bad. I just have a lot of peace. I am calm, relaxed, and things are easy. The only stressful things I have left are unrelated to my diet or fitness. There’s probably more. But, this is what I’ve thought of off the top of my head.” 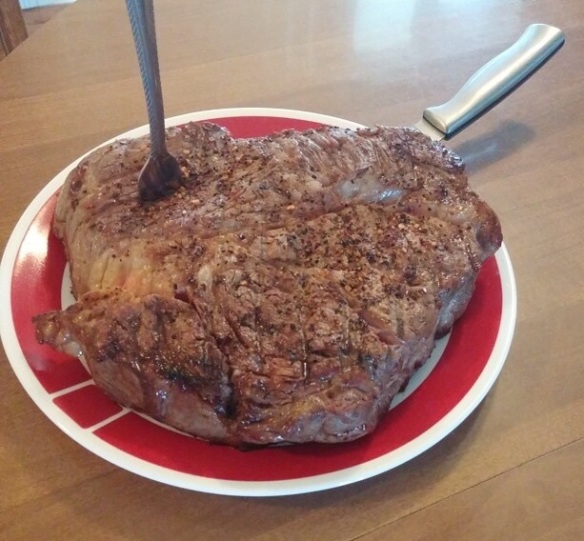 A chuck steak, seared on the outside and raw on the inside.

I asked Kevin to describe his daily menu…

“Average day: Usually some eggs (4-6) with bacon (1/5 – 1/4 pound). Lunch is usually pre-cooked burgers (1/2 – 3/4 lbs. of 75/25) or leftover steak from the night before. Dinner is usually a chuck steak cut from a chuck roll and the size varies heavily depending upon how hungry I am. Dinner could be half a pound or might be 3-4 times that. It’s probably closer to a pound most of the time. Dairy is very rare for me, but it’s not something I won’t eat. I put it in the same class as other “variety” foods, like liver, seafood, chicken, etc. They’re not bad foods. They just don’t make it onto my regular menu because I rarely think to buy them. Oh, and coffee. According to my doctor, far too much coffee. Of all the things, that’s what she wants me to cut back on. I tend to drink a pot a day, sometimes more. Usually, it’s poured over ice and watered down a bit. I just like the taste. No cream, no butter, no sweetener, just black coffee.”

If you are interested in meeting others who practice an All-Meat diet, please feel free to join Charles Washington in his Facebook group Zeroing in on Health or Michael Frieze in his Facebook group Principia Carnivora for guidance and support. These two groups use different approaches, so if you find that one does not suit you, please check out the other one.